I have been blessed to know all my grandparents.  Not just know them, but have wonderful relationships with each.  Three of them have passed away.  Papaw - Mom's dad - is celebrating his 90th birthday this weekend, and all the family will be there.  All but me and my crew.

I'm sure I've said this before on here somewhere, but this is one of the hardest parts of the expat life.  We have to make peace with the fact that the work we've chosen to do, that we feel called to do, will take us far away from the ones we love the most.

When we first told our families where we'd be moving to, part of me was afraid they might take it as a personal affront - I mean, could we get any further away from them and still be on Earth?

I would love to be one of those families that lives close to parents, siblings, aunts and uncles, cousins.  I would love to drop the kids off with the grandparents for a weekend, would love for their cousins to be at their birthday parties, would love to have weekly Sunday lunches - the kind I grew up with - together.

Our family has been so gracious.  Each wedding, birth, funeral, birthday, family reunion or retirement party we miss - they are so gracious.  They understand that we want to be there, but can't be.  But it's still hard to be the only one not there.

Okay, enough of that.  Here's a little tribute to Papaw.

He has a sense of humor. 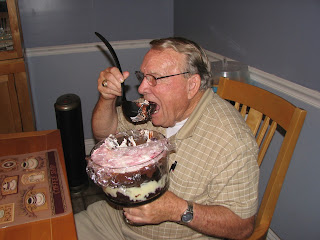 He is one of the most patriotic people I know.  He was in the Navy during World War II and patrolled the waters off of Borneo, not far from where we lived. 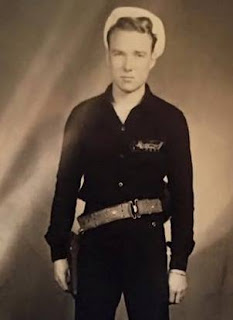 He is loyal to his family, and has a soft spot for grands and great-grands. 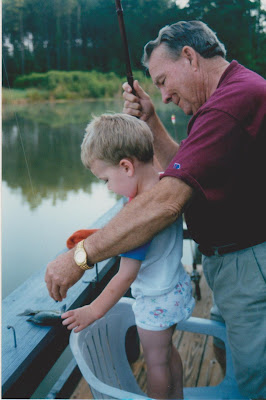 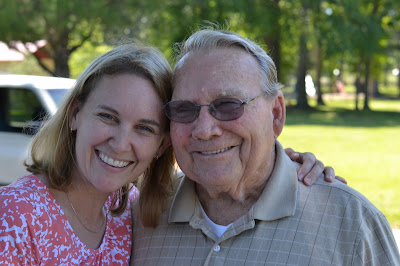 Labels: Life as an expat

As I've mentioned on here before, our niece Rachel lived with us for five months.  Before she left a few weeks ago, she shared some of the photos she'd taken during her time here in Sentani.  As I scrolled through them, my first reaction to some of them was, 'Why did she take a photo of THIS?' And then I remembered that whatever 'THIS' was would be weird/new/terrifying to most Americans. The longer we live in Indonesia, the more familiar the foreign becomes.  And that is as it should be, I guess.

So here are a few of Rachel's photos, which give a glimpse into our world:

Labels: Life as an expat, Life in Indonesia

Diary of an Injury

By nature, I am not a risk-taker.  No desire to go skydiving, or bungee-jumping, or even scuba diving. However, some might argue that the fact that I, at my advanced age, choose to play basketball, puts me firmly in the Risk Taker Category, right alongside BASE jumpers and lion tamers.  They might be right.

One of the things I love about our community here is the opportunity to be active.  Monday through Friday, there’s a different sport that moms can take part in at the school gym.  My days are Tuesday Volleyball and Friday Basketball.

But now, as an adult, playing pickup basketball is awesome.  I start EVERY GAME.  There is no bench to warm, because usually we’re lucky if we have enough players for three-on-three.

We play for about an hour, and exult in all the calories burned.  Then I go home and drink a 600-calorie “recovery shake” that negates all calorie burn. David accuses me of playing basketball just for the recovery shake (Recovery shake: a frozen banana, some milk, some cocoa powder, a few tablespoons of peanut butter).
So what makes this risky? The fact that I keep getting injured.  A few years ago at Friday Basketball I caught a crazy pass and when I looked at my pinky finger it was bent in a freakishly unnatural 90-degree angle.  Thankfully my friend Karen, a nurse, was there, and she popped it right back into place.  But it took weeks to recover.
Last Friday I was playing basketball, and we were having a good game.  Then, a loose ball, and Holsten tussles with another lady for the ball.  Did the thought, “Slow down, honey, and remember the pinky!” go through her mind? No! It was more like, “Ball, ball, must get ball!” and then boom, I was on the floor in pain.
I had twisted my ankle, and it immediately began to swell to mythic proportions.  David was called, and he very graciously took me to the nearby hospital with a working x-ray for a scan, not once saying what he was probably thinking, “NOW, will you stop playing ball?”

Who gets real x-rays anymore?  A few years ago after the finger incident, I was back in the U.S. and saw an orthopedic doctor for his take on how I was healing.  I handed him the x-ray that was done in Indonesia, and he inspected it like a relic from Tut’s tomb: “Hmm, haven’t seen a film x-ray in a long time.”

But we’re just glad we can get an x-ray here, be it film or digital.  Karen was a big help, writing some doctors in Singapore for an opinion, and checking on my foot.  The pain has been intense, but it appears that it’s just a sprain. Our expat doctor Dr. Di took a look at me yesterday and put me in a boot, and that has helped (our little clinic has quite the collection of boots, crutches and braces that get passed around the community). David just got back from meetings the day before my injury, so he’s been able to chauffeur me and the kids around and help with everything.
In many ways, Indonesia is a wonderful place, but it is sorely unaccommodating to those with physical disabilities.  Trying to negotiate parking lots and stores in crutches is about as easy as roller skating at the beach.  And because most cars here – including ours – are manual transmission, I’m unable to drive with a gimpy foot.  This experience has made me more empathetic with those dealing with long-term disability here.  I think of the man who often sits outside one of the stores in town, and I understand better why he moves so slowly on his crutches.
On Thursday, David brought out two medivac patients, both with foot injuries, and neither had crutches, so they got pushed from the plane to the ambulance on a luggage cart. It kind of makes me mad when I contrast that with the American experience of handicapped parking, handrails, ramps, and ECVs outside of every Wal-Mart that make it so much easier to get around with an injury.

A few people, after hearing how I hurt myself, have said, “Well now, that’s why I don’t play sports!” It’s crazy, but all I can think is, how long till I can get back out there and play? So maybe I am more of a risk taker than I thought.